Welcome to friends of Fiddlehead Farm who are planning to come celebrate Linda Scheiber's 80th Birthday.

Where: The event will take place at Providence Farm, in the Cowichan Valley on Vancouver Island.
https://providencefarm.wildapricot.org/

Accommodation: There are a range of places to stay in Cowichan Bay, BC. It is a 15-minute drive from Providence Farm.

Posted by Nancy Strider at Tuesday, January 30, 2018 No comments:

Fiddlehead Reunion - an invitation from Linda 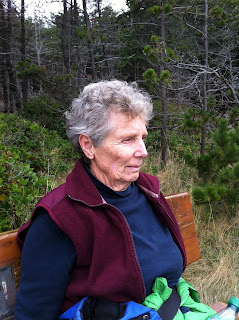 I will be having an 80th birthday party and Fiddlehead Reunion. Come out of the past and present, and help me celebrate. Liisa and Andrew will be coming from New Zealand and all other family members. The venue will be picked when we get the numbers. Please set aside the weekend of May 26-27, 2018 and let me know.

Are you among the people who spent time at Fiddlehead Farm and still hold the place, and the people, in your heart? If you are interested in contacting Linda to hear more about the Reunion being planned for late May, 2018 on Vancouver Island, please email her at: lscheiber@shaw.ca


This summer, we arrived by boat for my first visit back to Fiddlehead in 14 years, and landed next to the old Fiddlehead dock. There on the shore was a hut called "Fiddlehead Landing". To our surprise, David & Eagle, the leaders in creating the Sunshine Coast Trail,  happened to be right there. They were trail-building -- improving the trail to Fiddlehead and Tin Hat Mountain. The Sunshine Coast Trail explores spectacular terrain for 180 km. from Saltery Bay to Sarah Point. The "Confederation Lake -  Fiddlehead Farm - Tin Hat Mountain" section is a vital link. 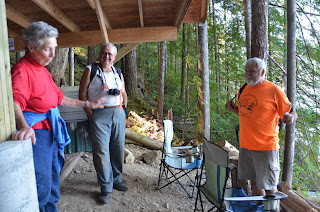 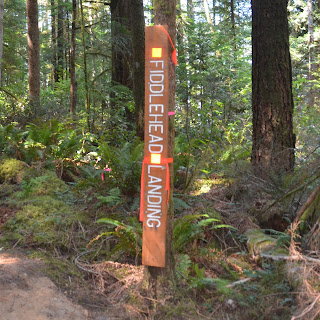 The reason that Eagle and Scott need to be commended for their work is because they put the trail through old-growth forest in order to save it from logging. And that is truly a great vision. It is my hope that the people who loved the farm and got an experience out of living there will come back and enjoy hiking on the Sunshine Coast Trail. Whether it be Fiddlehead Farm or not, it doesn't matter. Because there is some of the most incredible wilderness in the world there.


The Sunshine Coast Trail group has put out a book called "A Dream of Giants" that describes the whole trail. It has an extensive section about Fiddlehead Farm -- telling its history, showing relatively recent pictures, and extending an invitation to hikers. The caption of the above photo in the book reads "Nature is once again in the process of reclaiming the former Fiddlehead Farm". So much is gone back to the forest. 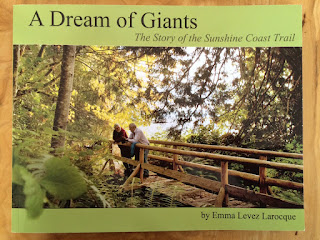 On my visit it was sad for me to realize that I couldn't even find my house site. But it was wonderful to think of hikers on the way through, able to spend the night camping in one of the woodsheds that is still remaining.

If you are interested in finding more about the "Dream of Giants" group that maintains and enjoys the Sunshine Coast Trail, here are some links:

Our visit to the farm again -- after 14 years

I just returned from a visit in August to Fiddlehead after 14 years away. I travelled there in the company of Timo my son, his wife Julie, and their 16 year old son, Elliot.

Walking up the same road brought so many memories. I could remember every stone, every log, every tree. It really looked the same. But the difference was in the light that streamed across the road, because of the clear-cutting which had chewed out huge chunks of the forest, just beyond the fringe of trees we remembered.
﻿ ﻿

We found the Meditation House, which is one of two remaining structures. People had written their names recently on stones, and left them in there. The other remaining structure is a wood-shed, now used by hikers as a camping shelter. The only other building that was saved was Liisa's house, that was traded to a contractor who moved it down to the dock, along with our power system.


﻿ ﻿
﻿ ﻿
﻿﻿Most of the surrounding area has reverted back to nature. ﻿﻿There was a lot of evidence of bears, who had moved into the remains of the orchard. They were having a fine time with the apples.

﻿ ﻿
And the site where the Dining Room/Kitchen had been was a large quarry which the logging company had made, for use on their roads. A large logging road went through the middle of the farm, and through the garden.


Without the buildings it was very difficult to orient oneself -- to the barn field, and to my house. We were thrashing through the trees trying to find where our house had been, and we found water pipes and power pipes and pieces of the roof, so we knew we were in the right spot.


Like an archaeologist, Julie leaned down and picked something up out of the debris. She had found our "Foley Mill". This was the tool we used for making apple-sauce: a strainer that had a crank that you turned to separate the pits and the skin from the apple. We fed the pulp to the pigs.  The mill was rusted, crumpled and partially melted by the fire. It was so significant to me because I had made gallons of apple sauce, using it, from those wonderful old trees. The orchard is disappearing, being deliberately overgrown by fir trees planted by the new owners. We took the mill out with us. Now it lives in the window that look outs on my garden (where the ceramic Gnome is still pissing), past my potting studio, and out to the hills of the Cowichan Valley. To me the  bent shape of the ruined mill looks like a smile.
﻿
﻿﻿﻿﻿﻿﻿﻿﻿
﻿ ﻿

You can burn the buildings, but you can't take away the experience

When I went back and saw the alders thriving, and the forest coming back, it felt like it was over. And that was okay. When Peter built the first buildings out of plywood and pressboard, it had nothing to do with forever, it was an experiment in education.

If we thought we worked hard, we were very aware of the Italian settlers that had come before us in the 1920's. They carved out a farm from wilderness. They had turned the cedar trees into buildings, by the sweat of their bodies. They didn't have any machinery. When we tore down that cedar house, we tore it down reverently, piece by piece. And it was respecting the life that those farmers had built in a very isolated part of the world.

Another thing I wanted to say about the development of the hostel and the building. It was totally organic. It wasn't conceived of making a business out of hostellers or people from Vancouver. The beginning of the hostel was that we couldn't do it all. It grew because we needed help. We all needed to give up a part of ourselves, so that the whole functioned.


When Peter first conceived of the farm, it was not to build a paradise where we would stay the rest of our lives. It had to do with people, and their experiences. It was for a transient place for people to learn who they were, in a very special environment. We found space and silence.
He never saw it in terms of the permanence of the buildings, but in terms of the people who came there, and their relationship to nature. Buildings come and go in any country and in any place. But the change that comes in the making of it -- the doing of it -- is permanent. That was clear to me when I went up to the place where the buildings are now gone.


Posted by Linda Scheiber at Monday, September 07, 2015 No comments:


People who stayed at Fiddlehead may remember the "Pissing Gnome" -- made thirty years ago in 1984 -- who lived up to his name, night and day, into the little pond by the front gate of her home.


That was her first and only gnome until the last ten years. While Linda was running the Farm, she had no time for making pottery. Now that has become an important part of her life. The Pissing Gnome now lives in Linda's backyard, and he begins this small two-minute video that I made four years ago. It not only shows the beloved ceramic sculpture, but also stars Linda, still doing some of the things she does best. A dozen years after the end of the rainforest Fiddlehead Farm, she continues to  take a creative and zesty approach to bringing sustainable food into the world while teaching other people how to do it themselves.

Mr Gnome has been joined by some relatives since Fiddlehead. Here are pictures of two of them, both true "Garden Gnomes", as they are cradling plants.

One is a lazy visitor in her front hall, perhaps reminiscent of a "before the Fiddlehead experience" newly-arrived guest.
﻿﻿﻿﻿﻿﻿

A couple of months ago Linda completed her own version of Mrs. Gnome. She was inspired by the 1977 book "Gnomes", written by Wil Huygen and illustrated by Rien Poortvliet. 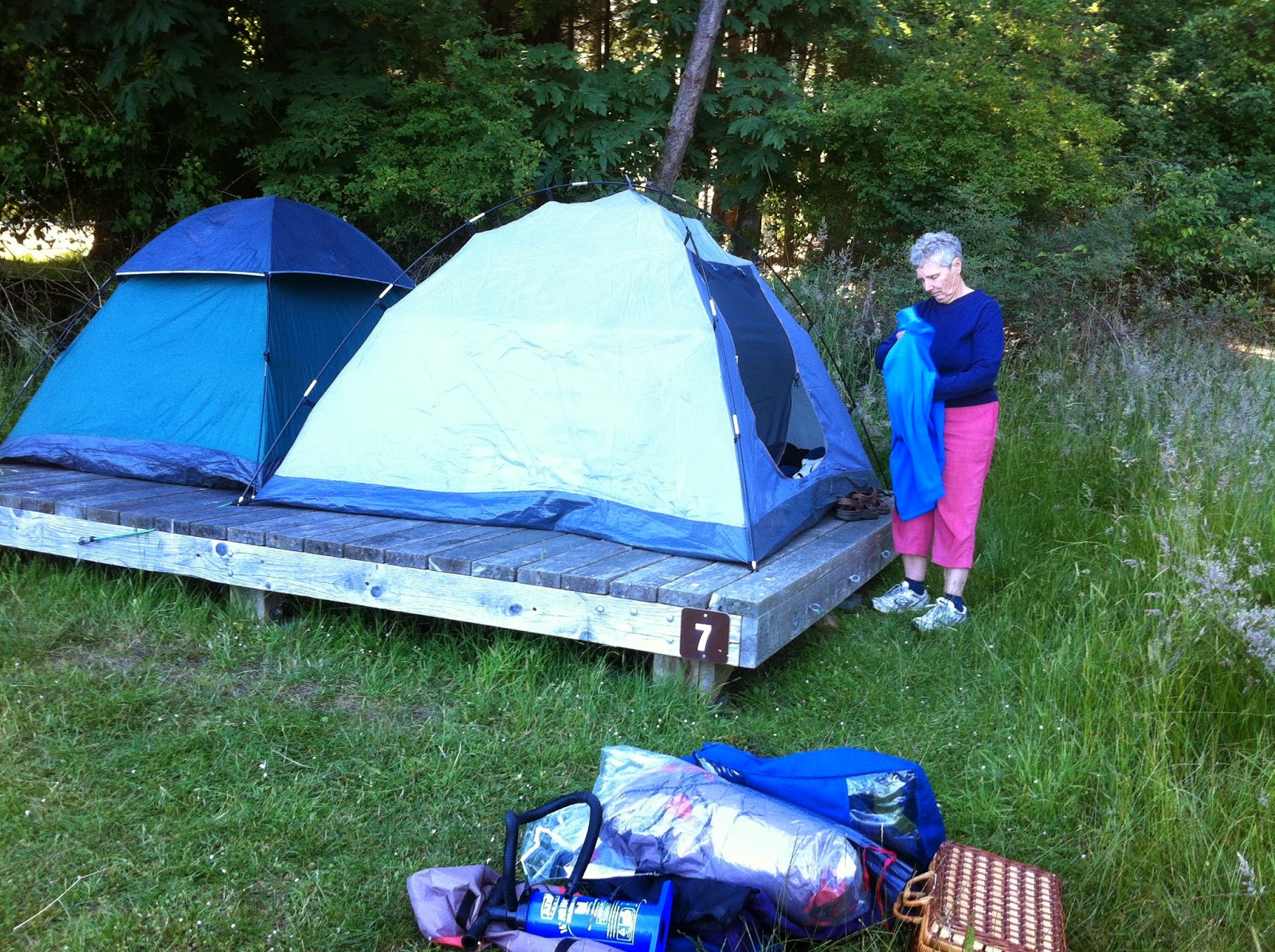 It is so good to read all the comments on the blog. And I'm feeling like I would like to directly get in touch with some of the old Fiddlehead Farmers. I still have a profound love of wilderness, and this picture -- taken this weekend at a walk-in campground on Saltspring Island -- is an example of how I am still getting out there as much as possible.

I go every year to visit Liisa in New Zealand, and have recently come back from a trip to Italy. I have a small studio in my back yard, and continue to make clay sculptures.

I live in a small village on Vancouver Island, and would love to have any one of the people who I met at Fiddlehead visit if you are in the area.

Here is my new email address -- fiddleheadlinda@yahoo.ca
Posted by Linda Scheiber at Sunday, June 22, 2014 No comments:

I am looking forward to more activity on the blog. I am glad to be back in touch.
Posted by Linda Scheiber at Monday, October 10, 2011 13 comments: 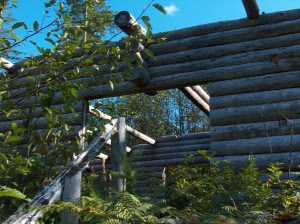 The Fiddlehead blog is in the process of being reactivated, and I did a bit of googling to see other references. Found a relatively recent posting on an interesting blog by local historians in Powell River, authored by Rob Tremblay, called "Vanishing History". Here is one of the photos from the site.


Here is the link to the page about Fiddlehead in the "Vanishing History" blog.

The author of Vanishing History commented "I recall sitting at our family cabin on Powell Lake and watching what we referred to as the Hippy Boat go by, it was a large boat, 30 ft or more, and always loaded with 10 or more people, it went slow and it was loud, this boat took people to the FiddleHead Farm back in the 1970′s, we always thought it was a Nudist Colony but you know how rumors are in Powell River."

I'm letting them know on the "Vanishing History" blog about this one, so hopefully they will pay us a visit.
Posted by Nancy Strider at Monday, October 10, 2011 No comments: 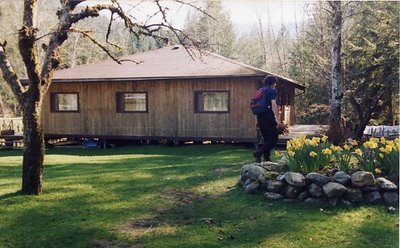 It has been fun to create this blog and relive all the old times. Since the physical part of the farm is gone it will be great for all of us to visit here. There are some long memoirs here but I don't want you to feel you have to compose an entire history of your stay. Just a short note on the incident you remember the most would be great along with pictures. I am continuing an active and inspiring life on the south of Vancouver island. I am building a ceramic building in my small back yard and plan to continue with clay sculpture. Please come and we can share the clay.
Posted by Nancy Strider at Saturday, November 11, 2006 5 comments: